Keith North is a self-taught outsider artist whose eclectic art and sculptures are inspired by a wide range of interests, from his passion for repurposing found objects and trash to the works of Western masters, and including Native Americans from his own ancestral roots. Keith’s residency focused on the creation of new sculptural and assemblage works for the first exhibition of his artwork, which was featured by Harrison House during the Morongo Basin Cultural Arts Council’s 2013 Hwy 62 Art Tours.

This weekend exhibition, featuring the works of artists-in-residence Mark Bulwinkle and Keith North in an installation of individual sculptural and assemblage pieces, drew over 300 local and visiting art-lovers to Harrison House during the 2013 Hwy 62 Art Tours. The interior of the house was transformed into a gallery, and the grounds into an outdoor sculpture garden, where guests could roam freely and meet the artist, Keith North. 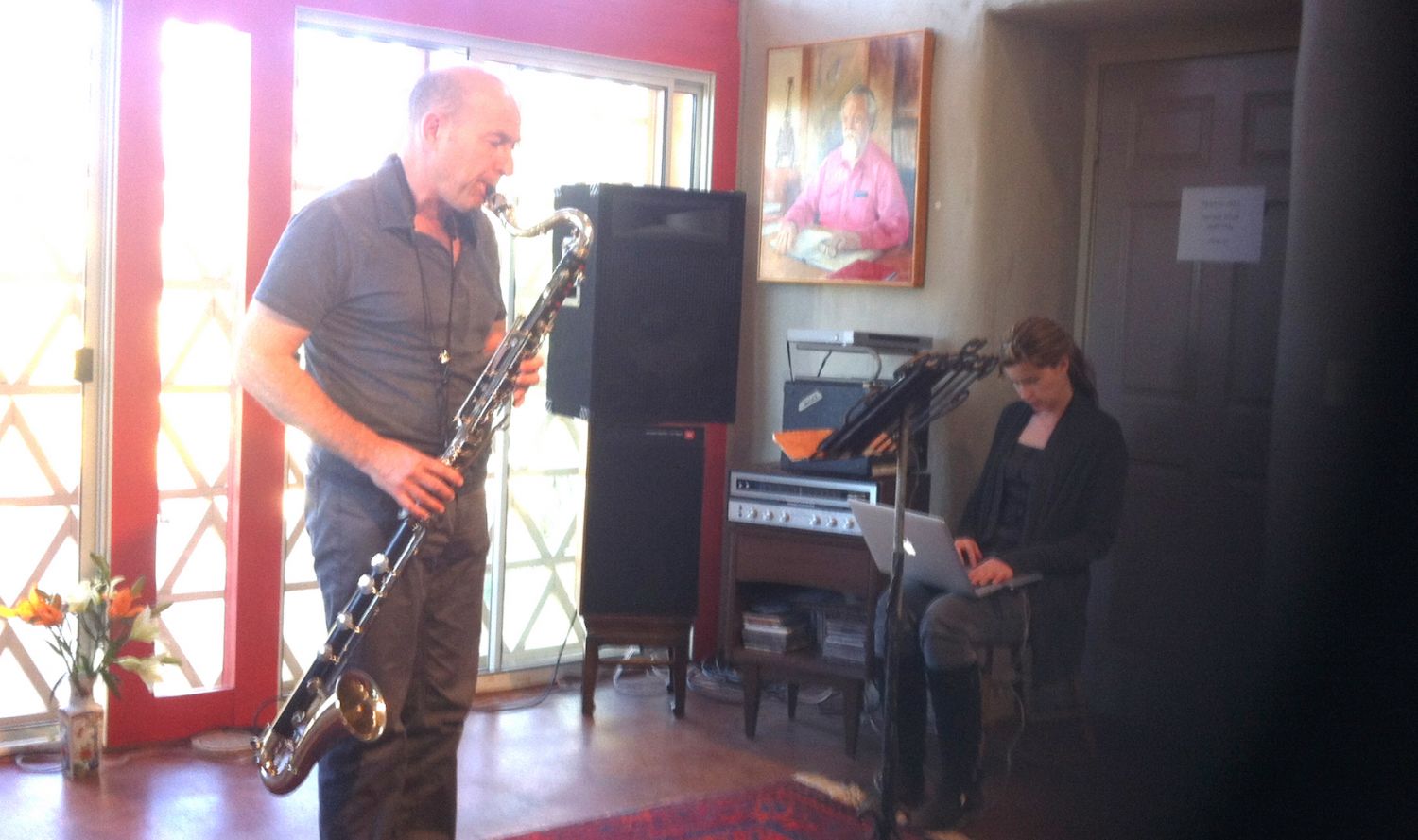 Award-winning composer/bass clarinet virtuoso Evan Ziporyn and his wife, composer Christine Southworth were invited to perform at Harrison House as a part of their 2013 west coast tour. Ziporyn makes music at the crossroads between genres and cultures and his commissions have included pieces for the Silk Road Ensemble, the American Composers Orchestra, Wu Man, and Bang on a Can All-Stars of which he was a founding member. He is also a founder of Gamelan Galak Tika and is the Director of MIT’s new Center for Art, Science and Technology. Southworth’s compositions are inspired by intersections of technology, art and music from around the world.

Serrano Culture & Bighorn Sheep Songs
An open house community event in honor of Native American Month with elders and members of the Serrano People from the San Manuel, Santa Rosa and Morongo Tribes

In honor of Native American Month, Harrison House Music & Arts presented an open house community event at The Joshua Tree Retreat Center Sanctuary where over 100 local residents and visitors to the Morongo Basin enjoyed and participated in a celebration of Native American culture and history. Elders and members of the Serrano People shared a tasting of authentic tribal foods and performed a traditional tobacco blessing and an ancient coyote dance, along with Serrano big horn sheep songs and stories from the high-desert region. The performers included Ernest Siva, James Ramos, Paakuma, Raymond Marcus, Kim Marcus and other members of the San Manuel, Santa Rosa and Morongo Tribes who were all invited back to Harrison House for a fellowship luncheon following the festivities. 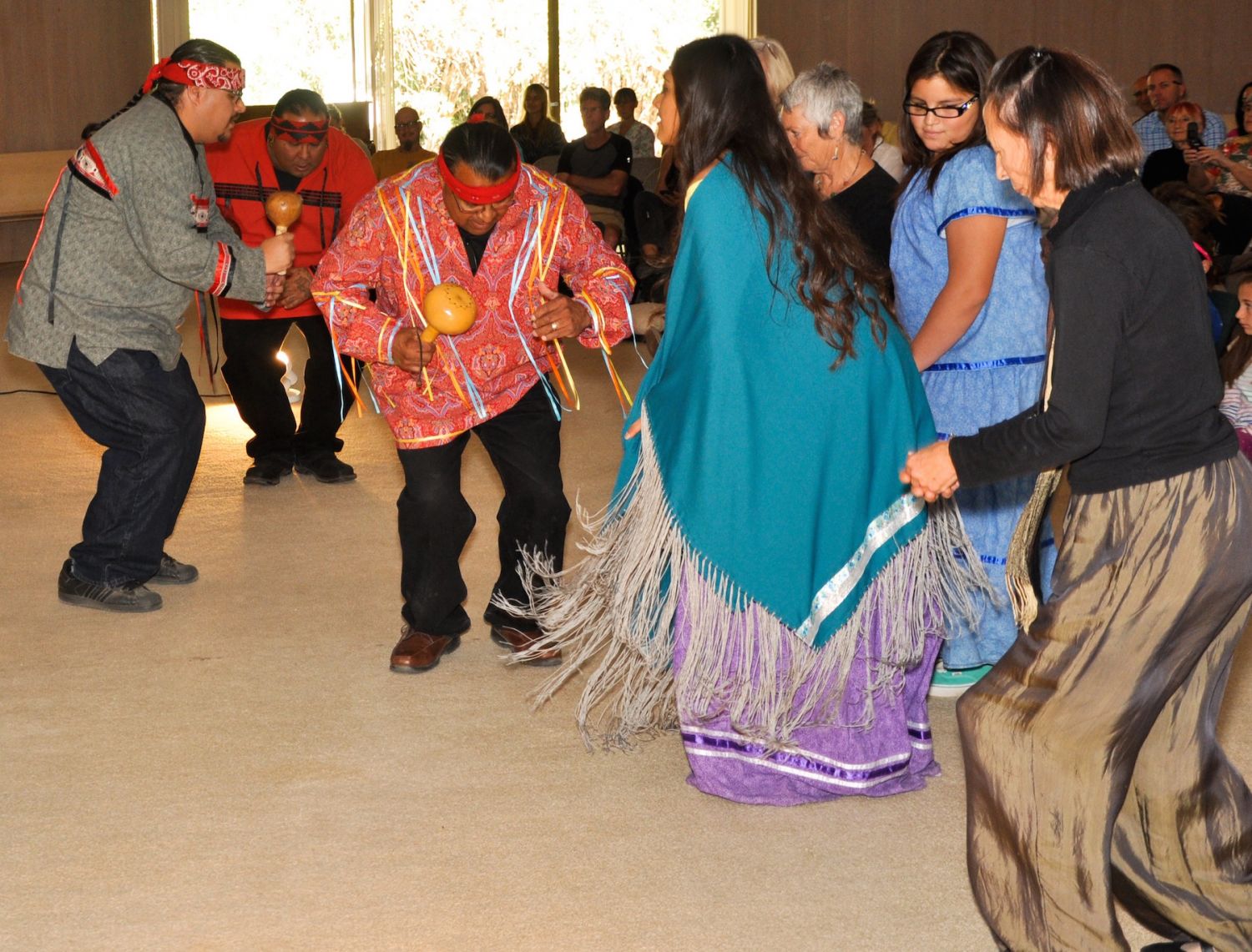 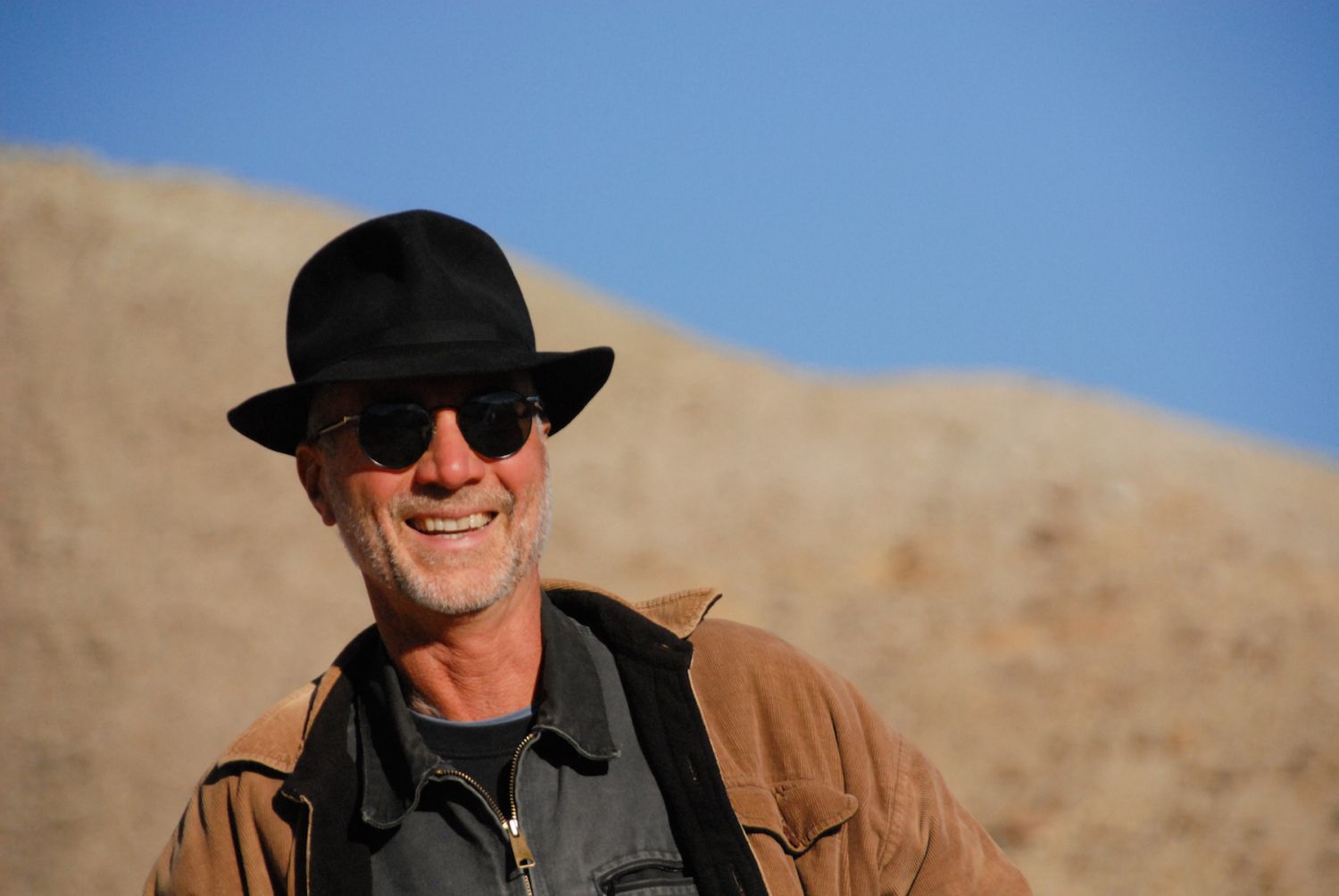 John Luther Adams is a composer whose life and work are deeply rooted in the natural world, making Harrison House the perfect setting to inspire his latest composition for piano and strings. He has been called “one of the most original thinkers of the new century” by Alex Ross of The New Yorker. John was recently awarded the 2014 Pulitzer Prize for music for his composition “Become Ocean” and his latest release “Inuksuit” was selected as one of NPR’s Top Fifty Albums of 2013. His residency was made possible thanks to a generous sponsorship contribution by Sue Bienkowski.

Ralph Samuelson is a master performer and teacher of traditional and contemporary music for shakuhachi. His studies began in the 1970s with the distinguished Living National Treasure shakuhachi virtuoso Goro Yamaguchi, and he has since taken a special interest in new music by American composers. This was an encore concert and workshop residency for Ralph who first performed and taught at Harrison House in May 2011. 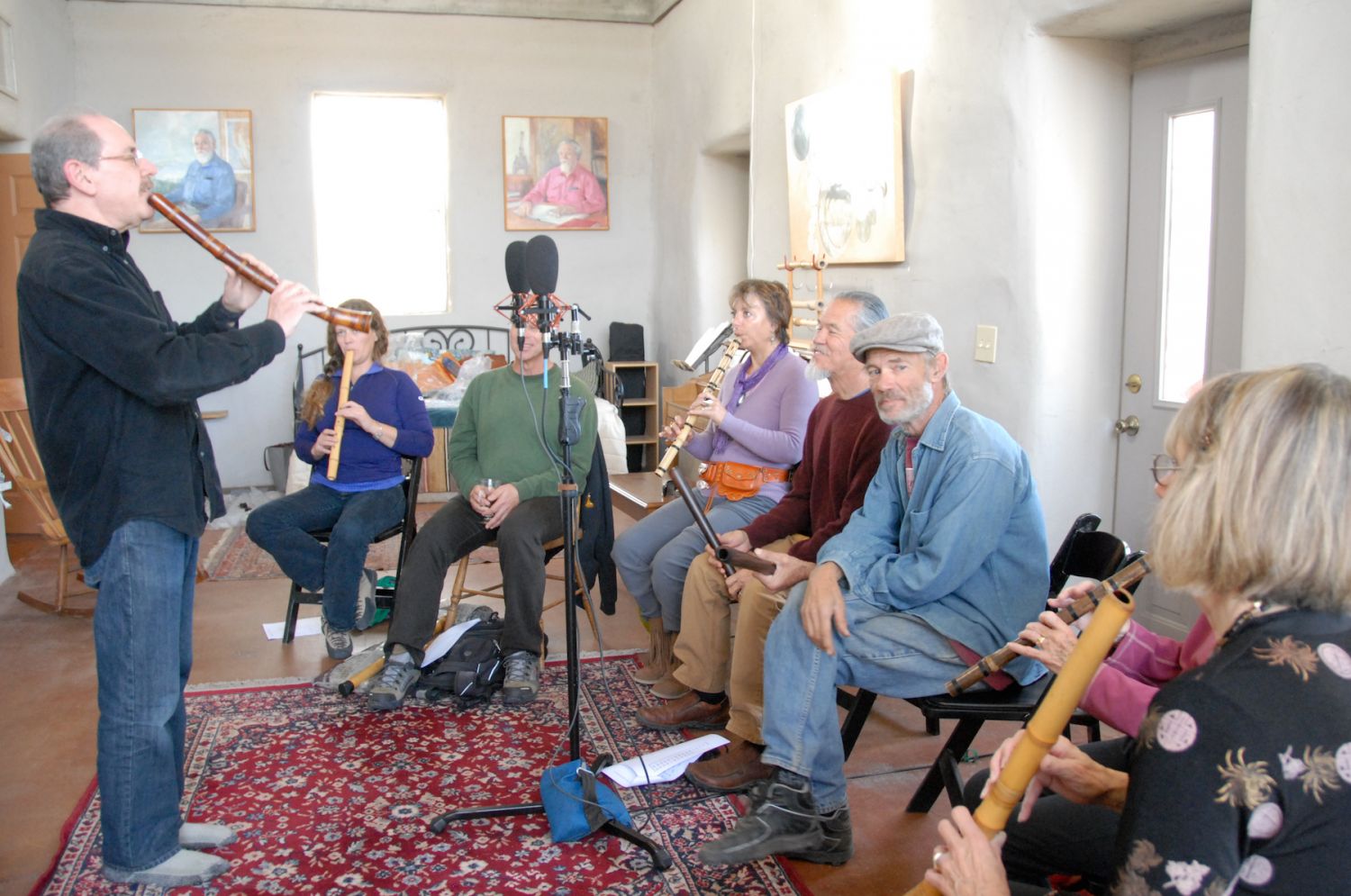 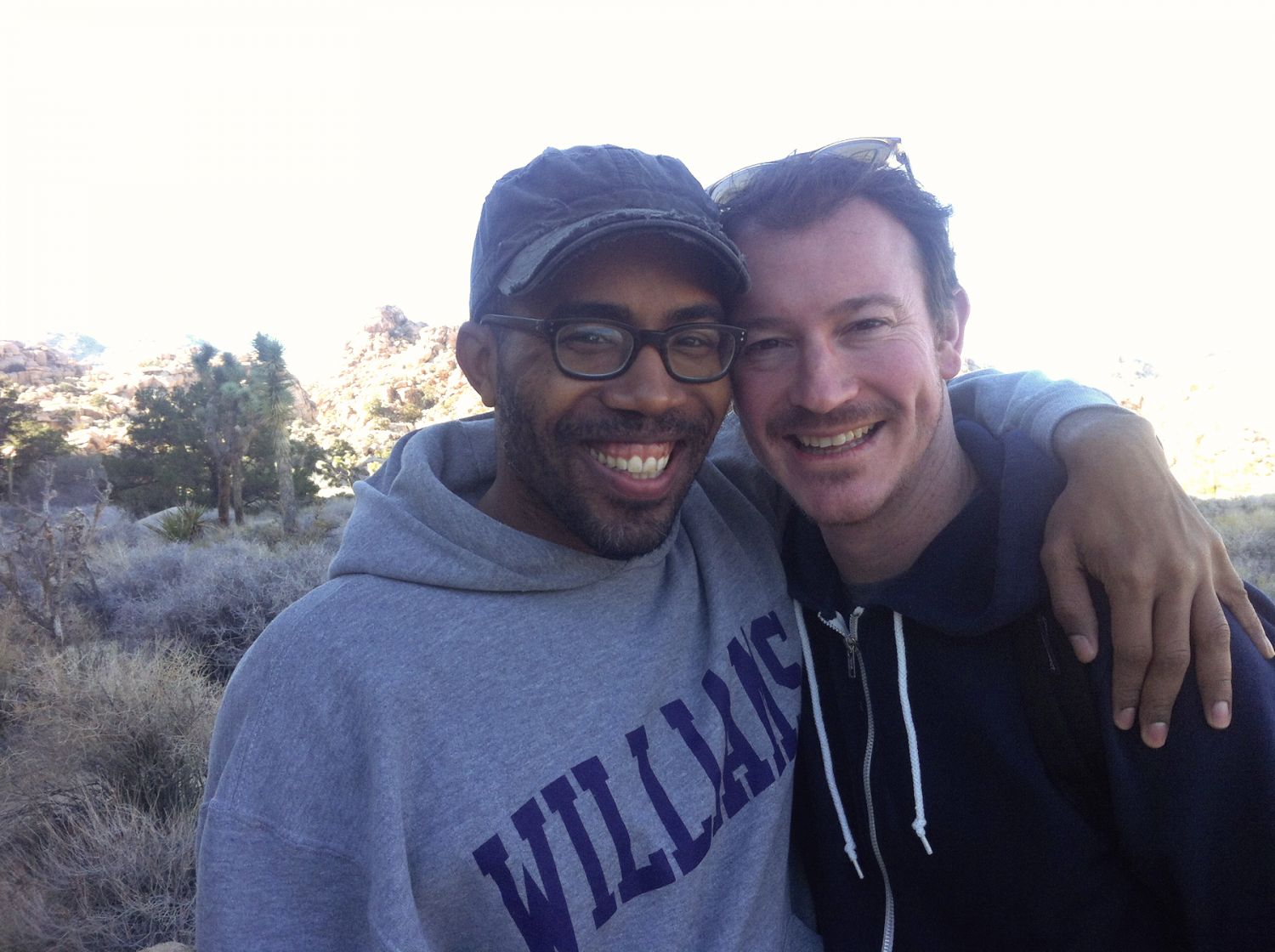 Danny Paul Grody is a songwriter and guitarist and his partner Kenric Taylor is a composer and pianist. During their stay at Harrison House, both artists made progress on writing, composing and recording new works for upcoming projects to be produced in the San Francisco Bay Area. Their residency was made possible by a generous sponsorship contribution from the John S. Knudsen Trust.

Chris Brown is an American composer, pianist and electonic musician who creates music for acoustic instruments with interactive electronics, for computer networks and for improvising ensembles. His wife Johanna Poethig is a visual, public and performance artist who creates public art works, murals, paintings, sculptures and multi-media installations. While working on their collaborative ongoing video-music series “Music of the Lost Cities” at Harrison House, they shared some of the completed installments, accompanied by both live and recorded music, with a local studio audience during a recording of Ted Quinn’s Sunday Evening Variety Show at the Radio Free Joshua Tree Listening Lounge in downtown Josha Tree. 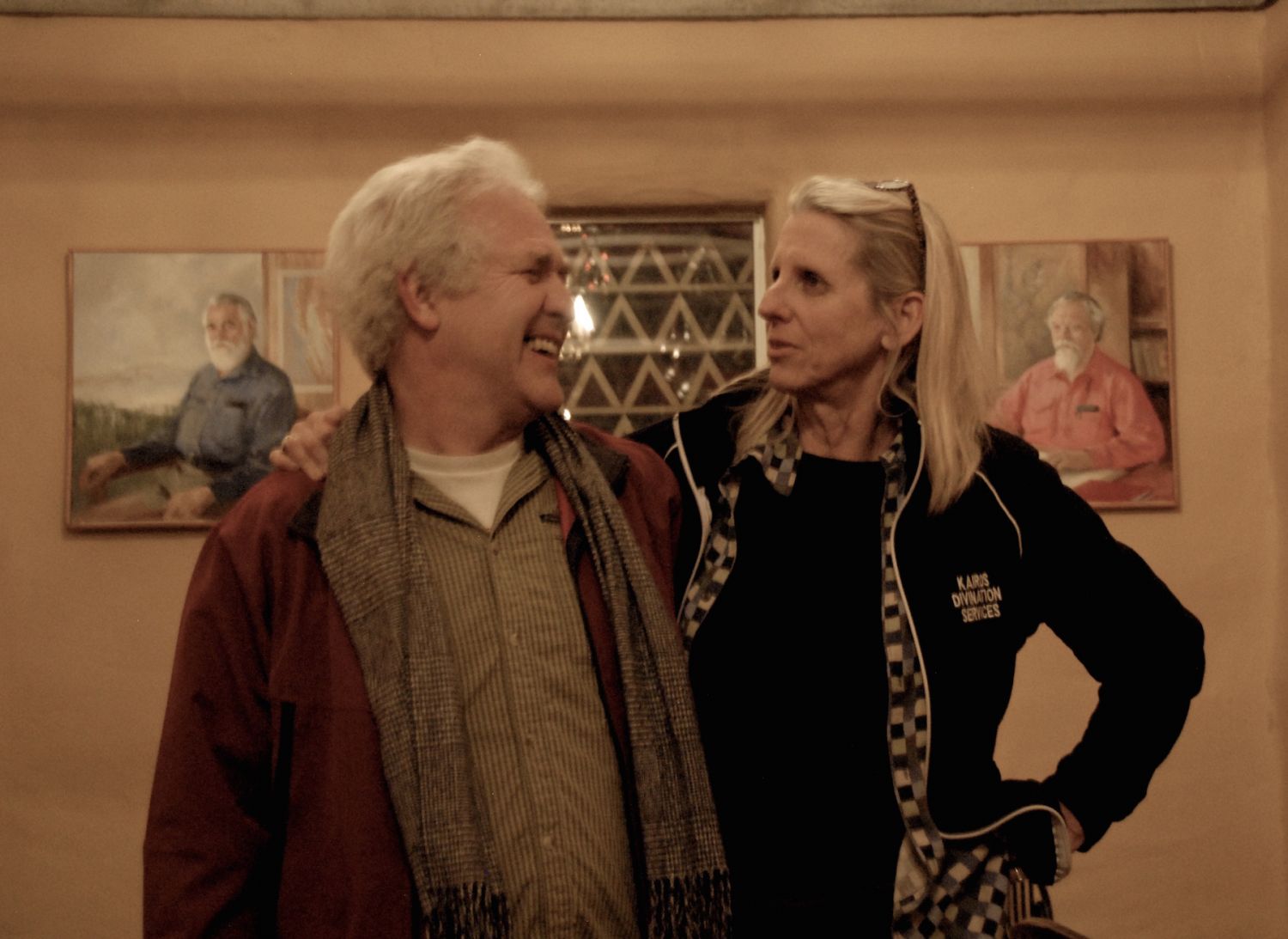 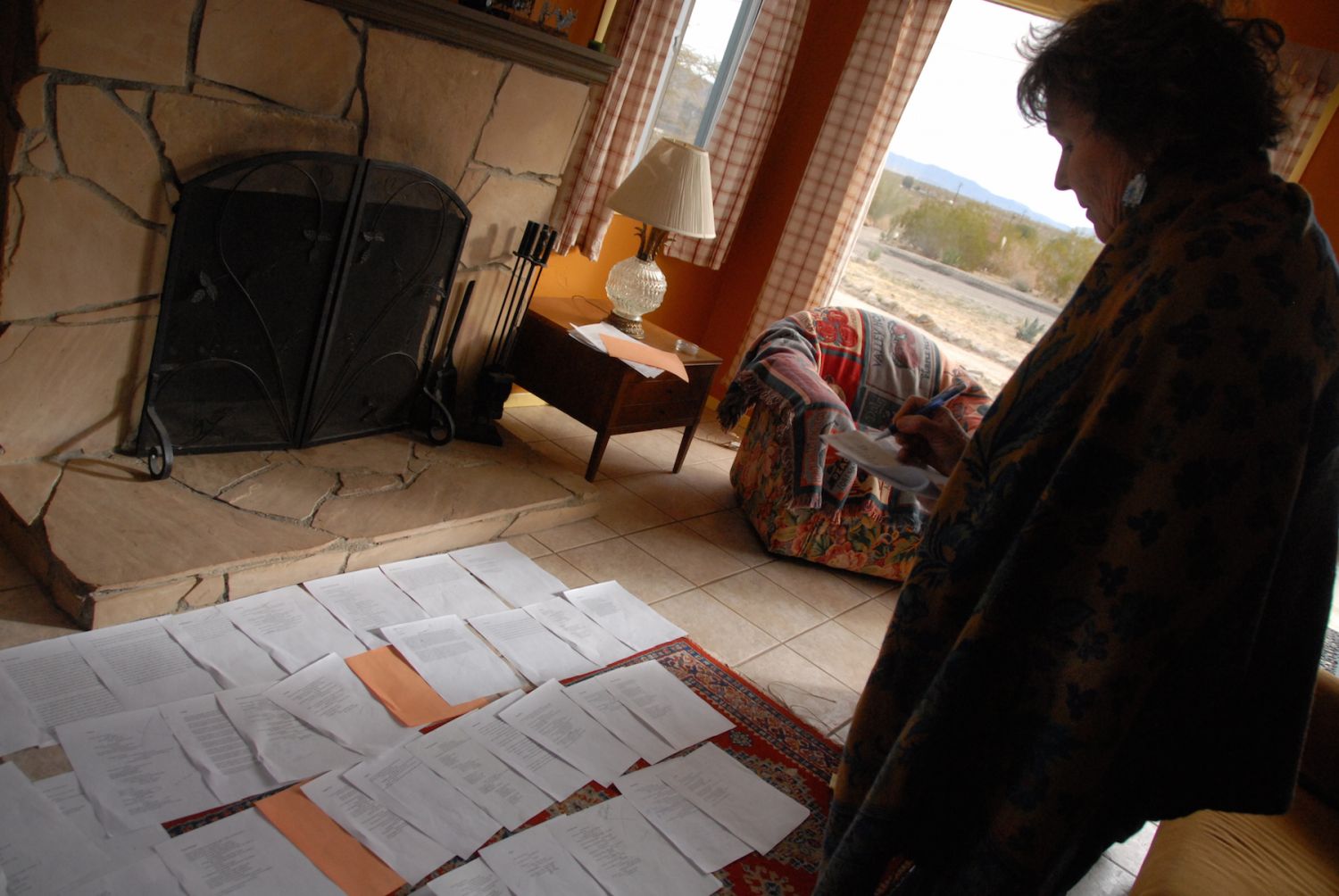 Susan Suntree, Writer/Storyteller
Residency was dedicated to working on an upcoming book of essays

Susan Suntree is a poet, performer and essayist whose work investigates the dynamics of science, art and spritual philosophies as they engage contemporary life. Her best-selling book Sacred Sites: The Secret History of Southern California, with a forward by Gary Snyder and introduction by Lowell Bean, won the Southern California Independent Booksellers Award for Nonfiction and PEN Oakland Josephine Miles Award for Poetic Narrative. While at Harrison House, Susan began work on her upcoming book of essays.

A two-part workshop on sculptural body positions and hand gestures derived from Bharatanatyam, an ancient classical temple dance and yoga practice of South India, was presented by Eva Soltes who is a 40-plus year performer and teacher of Bharatanatyam, having received intensive training for over twenty years from the late legendary dancer T. Balasaraswati. Eva is also the Founder-Director of Harrison House Music & Arts. 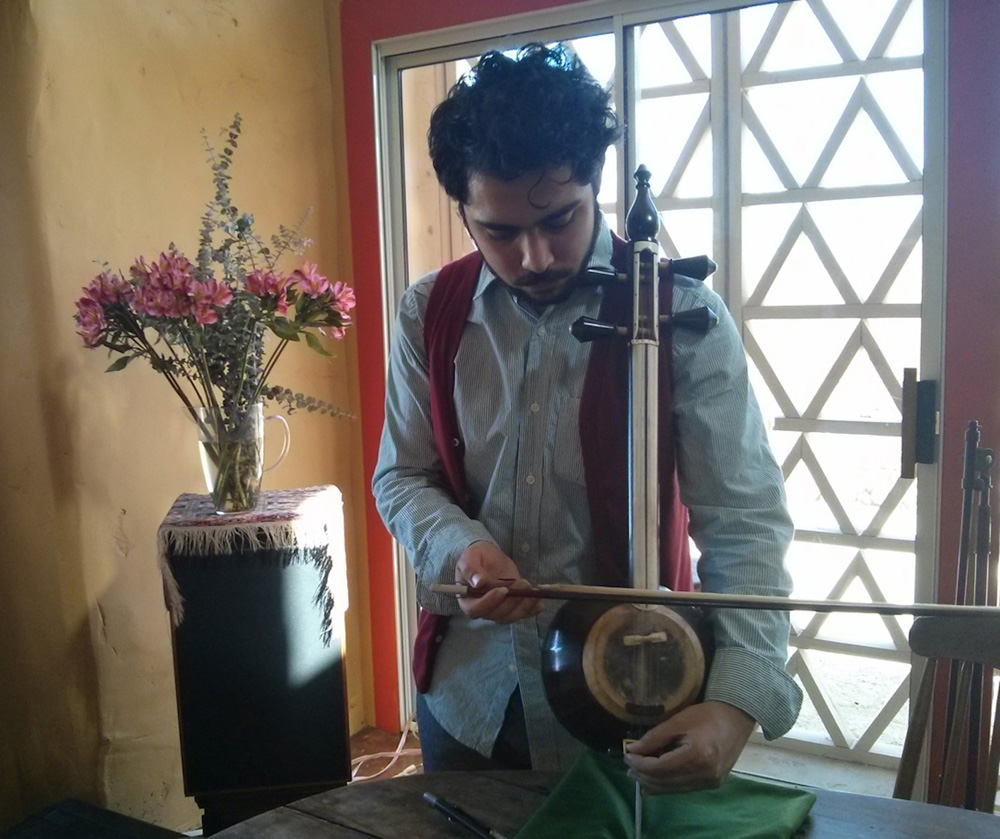 Saba Alizadeh’s musical career is divided along two distinct paths, traditional and contemporary. He enjoys performing and composing in Persian traditional form as well as collaborating with other musical traditions such as Indian, Mexican and early European in such ensembles as Nour and The Land Trio. His experimental electro-acoustic compositions mostly deal with everyday social and political issues and include a theatrical element. Saba was joined in his Harrison House performance by friends and fellow-musicians Odeya Nini, Justin Asher and Louis Lopez in a special send-off celebration marking his next musical endeavor, an extended return-visit to his homeland of Iran. The performance began on the outdoor stage (see photo on page two of this book) after which the audience strolled through the moonlit gardens and into the Harrison House ‘great room’ for the remainder of the program.

Michael Byron is an American composer and editor of contemporary music anthologies. Byron’s compositional trajectory, characterized by some as “second-generation West Coast minimalist,” was shaped by his teachers James Tenney and Richard Teitelbaum as well as his associations with Peter Garland, Lou Harrison, William Colvig, Robert Ashley and the early experiments with the California Institute of the Arts. He was the publisher and editor of the journal Pieces and is published by Frog Peak Music, and his music has been released on several labels. During his residency Michael composed Music for Two Pianos, and was also able to work one-on-one with San Diego area-based harpist Tasha Smith Godinez with whom he he had been associated for the past five years but had never previously met in person. 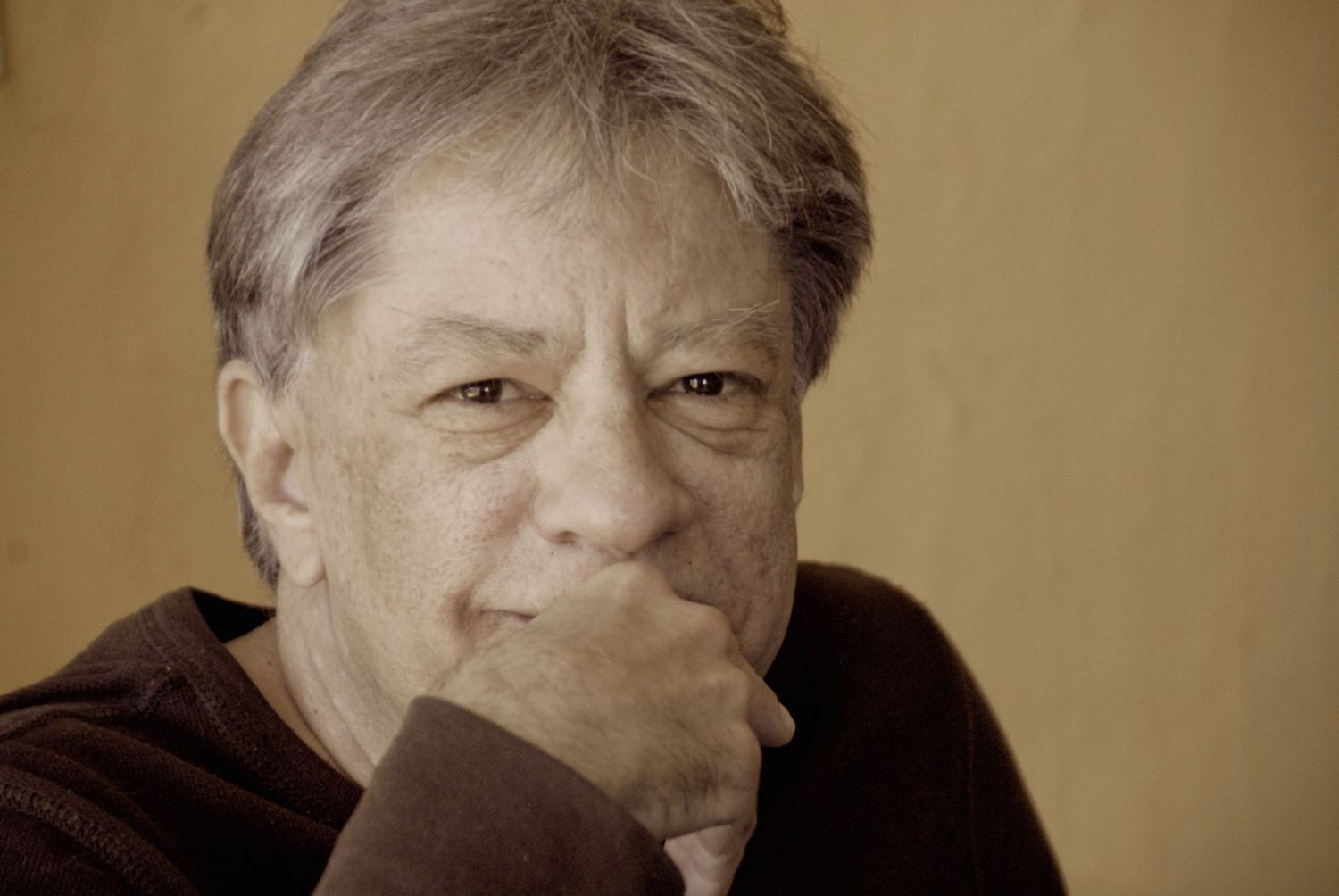 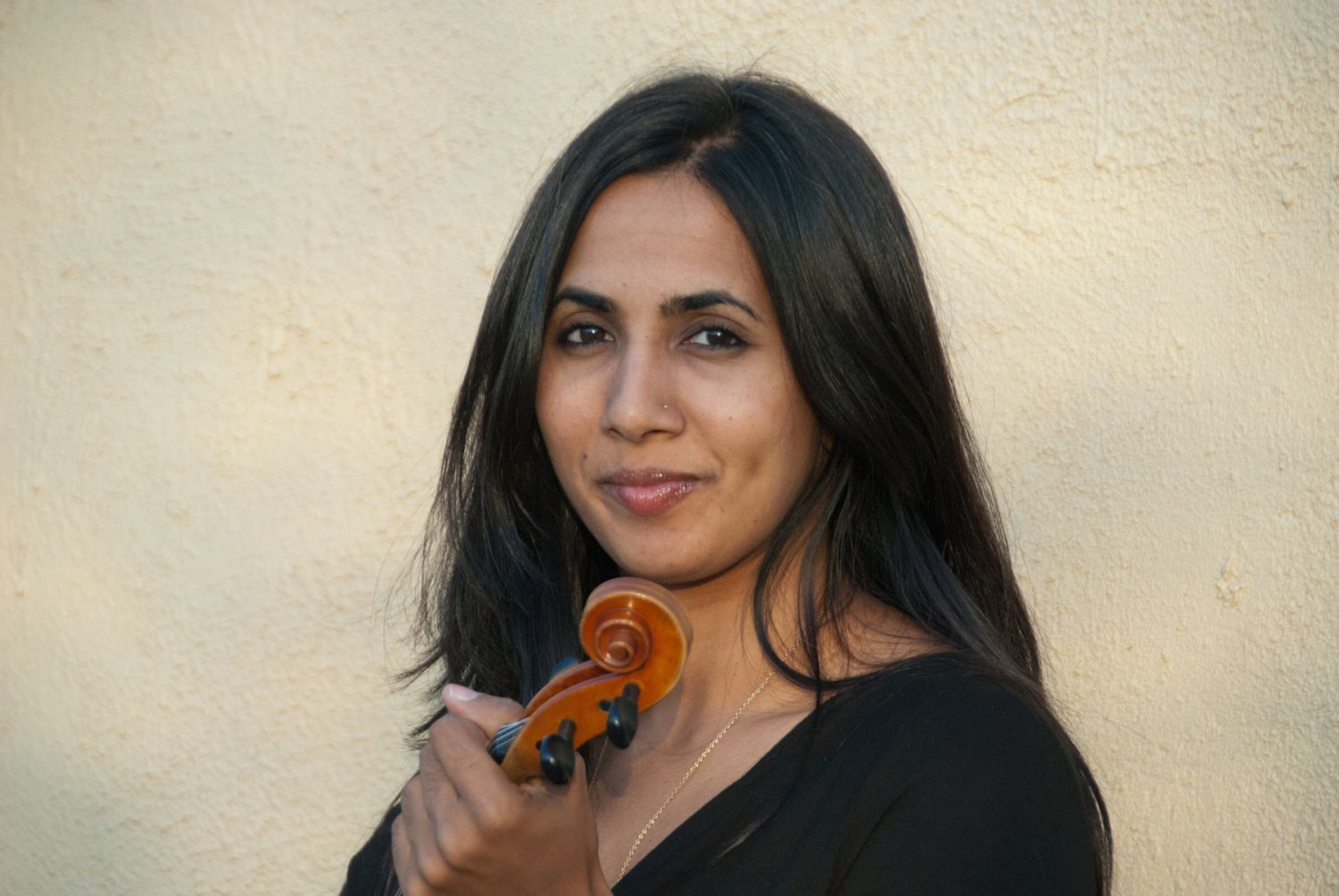 Shalini Vijayan, Violinist
Solo violin performance encompassing repertoire from Bach to the present and representing composers from around the globe

Violinist Shalini Vijayan, deemed “a vibrant violinist” by Mark Swed of the Los Angeles Times, is an established performer and collaborator on both coasts. She is a founding member and Principal Second Violin of Kristjan Jarvi’s Absolute Ensemble, having recorded several albums with them including 2001 Grammy nominee, Absolution. A member of the New World Symphony in Miami Beach, Florida from 1998-2001, Shalini served as concertmaster for Michael Tilson Thomas, John Adams, Reinbert de Leeuw and Oliver Knussen. In Los Angeles, she is featured regularly with Grammy Award winning Southwest Chamber Music , was a member of the first violin section of the Pacific Symphony Orchestra for ten seasons and served as Principal Second Violin of the Opera Pacific Orchestra from 2003-2008. She has appeared on over a hundred film scores including The Incredibles, Ratatouille, Star Trek, Up and Avatar as well as on every season of the television show Lost. Shalini is a founding member of the Lyris Quartet, and of the newly formed Varied Trio.

Maxime Rioux (a.k.a. Maxime De La Rochefoucauld) is a Montreal-based musician and performance artist best known for his compositions produced on musical instruments with homemade striking mechanisms, often built specifically for a single live performance. Most instruments (usually string or percussion) of his Système Ki, as Rioux calls it, are not played directly by a musician. Instead they are mechanically linked to a woofer that is driven by an inaudible, extremely low frequency electrical signal. The name “Ki” refers to the Japanese translation of Qi, the notion of a vital energy that animates all things. A two-day open house exhibition of Rioux’s work at Harrison House enthralled audiences with its theatrical overtones. The installation was designed in collaboration with Eva Soltes and all of the musical instruments used were provided by local musician, Robbi Robb.  This residency was sponsored by the Council of Arts and Letters of Quebec with additional funding from Raulee Marcus. 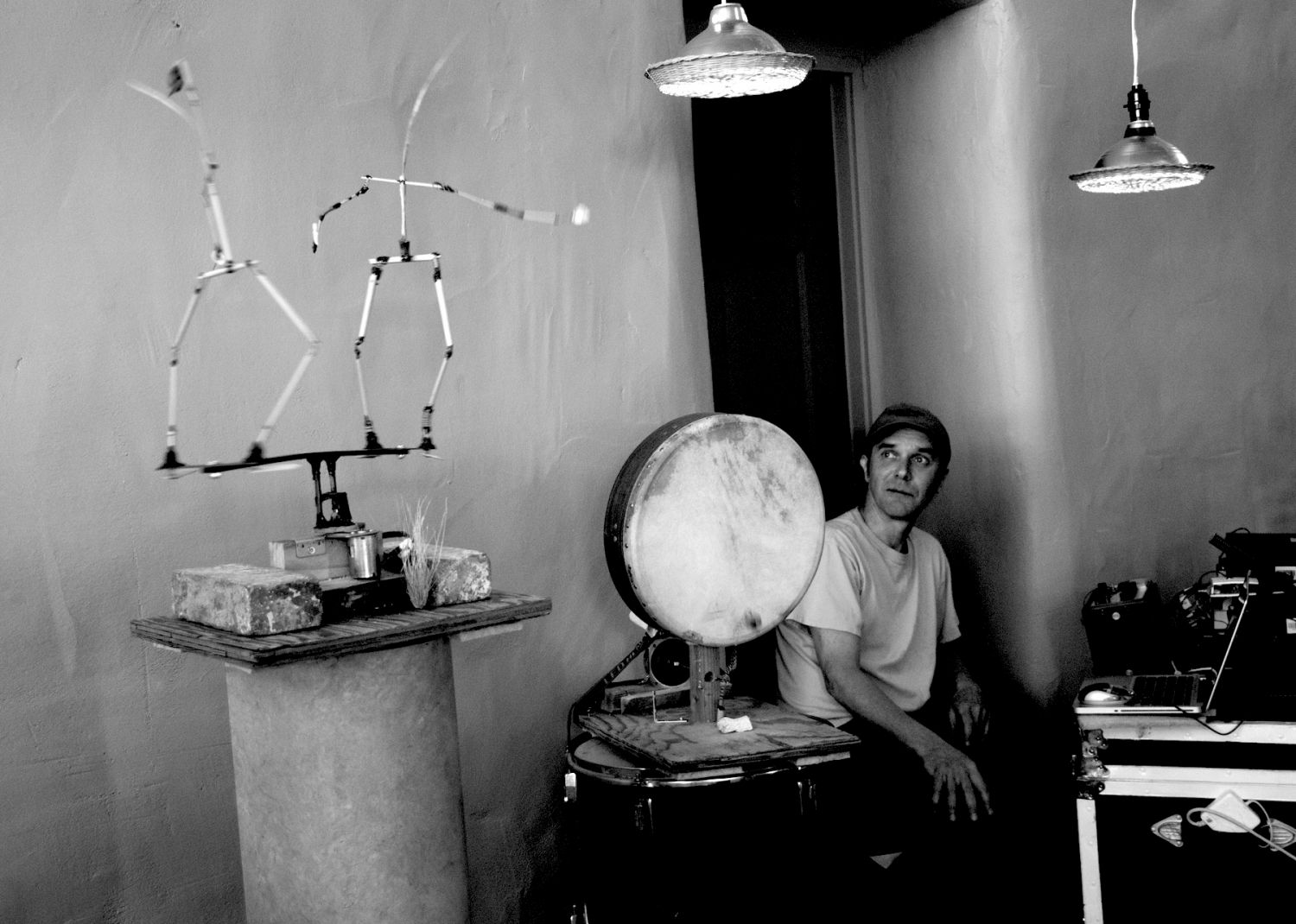 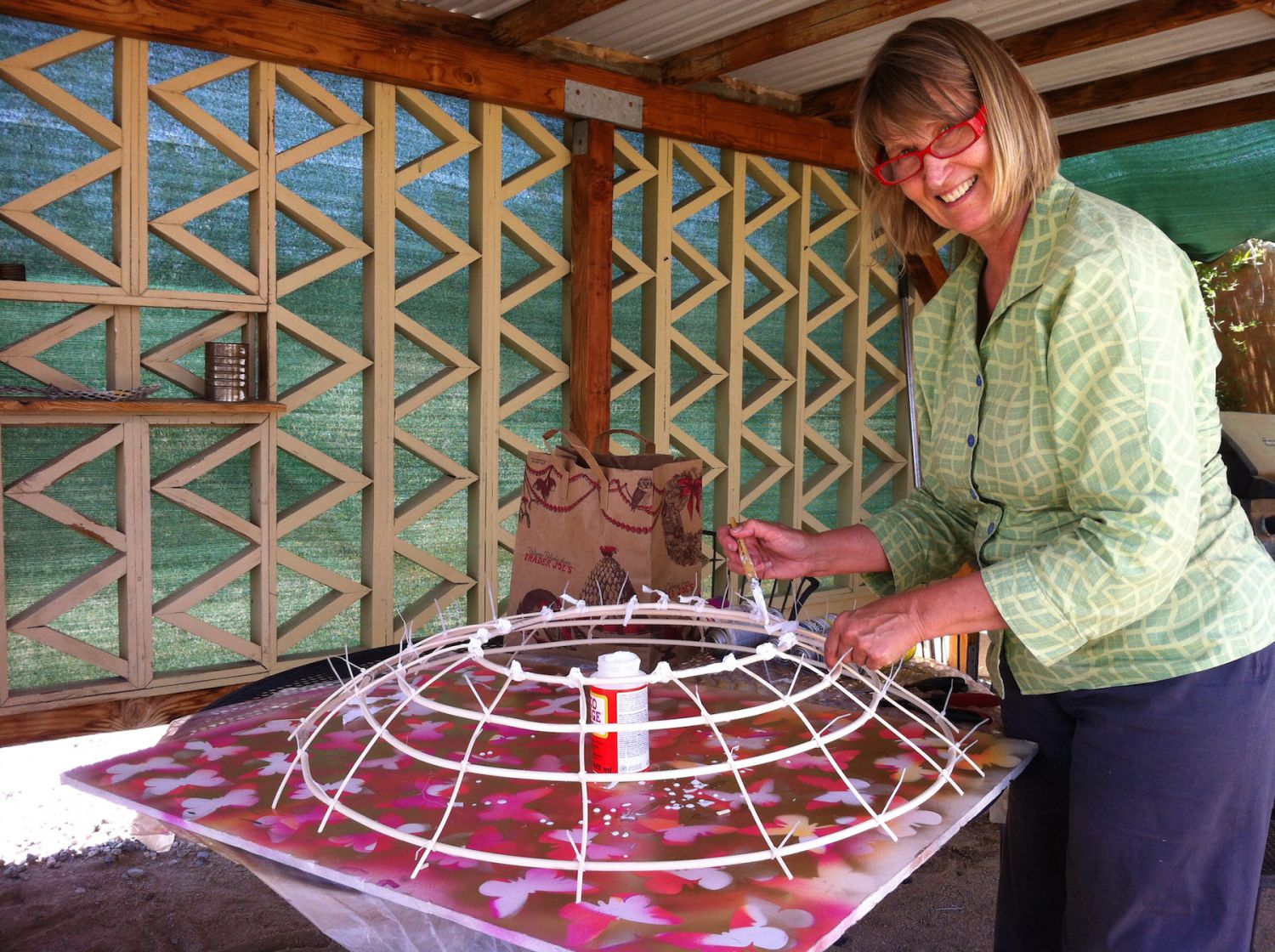 For the past 20 years costume designer Margaret Hatcher has designed and constructed costumes for theater, film and fine art print. She currently resides in Sonoma, California where she works as an artist and oversees art programs at the Sonoma Community Center. Her costume credits include Jim Henson’s International Festival of Puppet Theater in NYC and The San Francisco Opera and her work has been exhibited at the di Rosa Preserve, the Sonoma Valley Museum of Art and the Sonoma Culteral Arts Council. Margaret’s residency added a fresh flair of creativity, buzz and community partipation to our versatile mix of Harrison House events, with a runway show extravaganza featuring a talented group of local residents modeling twelve of her stunning costume creations. The show was staged during Joshua Tree’s monthly “Second Saturday” art crawl in collaboration with THE STATION, a new event venue in downtown Joshua Tree.

Singer/composer Timothy Hill weaves a natural purity of voice with threads of otherworldly abstract sound into a unique musical synthesis. Having performed with such diverse artists as Pete Seeger, Jeff Buckley and Bill Frisell, Hill’s musical explorations span the generes of folk, jazz, world music, contemporary and classical improvisation. He has released three recordings of original songs, This Bright World, The Human Place, and Spirit’s Body and he contributed to Grammy-nominated spoken-word-with-music collection Pete Seeger: The Storm King. During his residency Hill performed a solo vocal concert featuring selections from “Body of Sound,” from his pioneering exploration into the nature of the voice and harmonic singing as well as original and traditional material with his own guitar accompaniment. He also presented a workshop focusing on harmonic singing as a foundational practice. 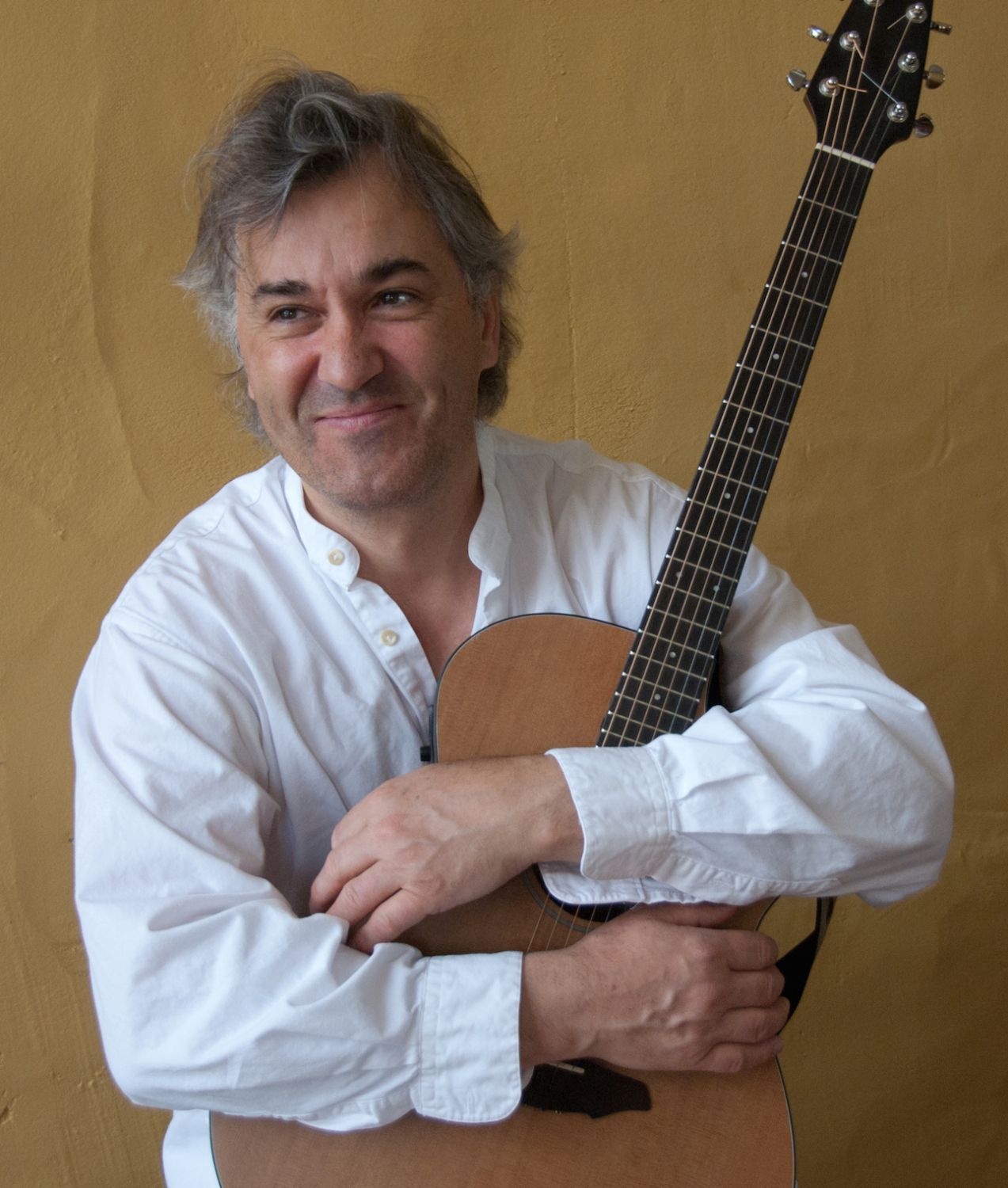